People arriving on the Washington DC Mall for the One Nation rally. The signs being held up accurately represented the priorities of the rally. Jobs were the number one priority, the rally was very heavily attended by labor supporters (I got there on a free labor-sponsored bus). Peace was present in the speeches from the Lincoln Memorial, but I didn't see people holding up many signs with a peace theme. Justice was a concern, of course, but again, there wasn't much visual evidence of that. 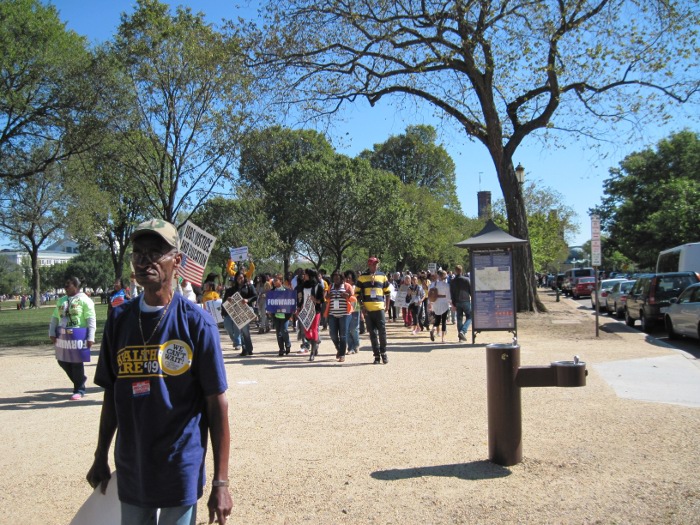 From the blog Crooks & Liars:

-- As you can see from some of these shots (and the video we ran yesterday), the crowd was amazingly diverse: It drew people of all colors and persuasions -- except, of course, conservatives. That was quite a contrast with the Beckapalooza snorefest, which was amazingly white and otherwise perfectly monotone.


C&L also reports that the regular media gave us little to no coverage. Big surprise there! [/snark].

The website One Nation For Peace had some really awesome posters. If I had been able to collect them and store them properly for the trip back, I would happily have done so. Even though an announcer at the rally said our rally was bigger than Glenn Beck's a while earlier, The Atlantic Wire doubts that. 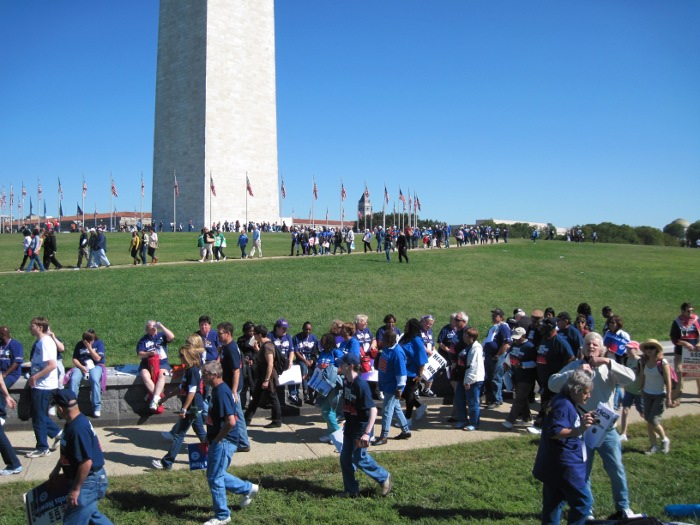 
More than 400 organizations - ranging from labor unions to faith, environmental and gay rights groups - partnered for the event...

Organizers insist the rally is not partisan. They say the message is about job creation, quality education and justice. However, the largest organizations, such as the AFL-CIO and the Service Employees International Union, tend to back Democratic candidates.


One thing that I remembered from the protest's back in the early "70's was the way that the left behave. I'll state this unequivocally, the Left has more fun at these things than the Right. I saw much joy at the rally, people singing and dancing, talking to each other and having fun.
One thing that I was really happy about was the amount of Socialists that were there.


And yes, Googling around about the rally shows that the right-wing bloggers/commenters are terribly upset (Check out especially the caption to the 2nd photo) about the communists and socialists that were at the rally. Those groups were indeed well-represented. This YouTube and photos 13 thru 15 from the previous link show garbage strewn on the lawn. Unfortunately, I got a quickie lunch just off-site about 300 yards off from the rally and didn't see a trash container anywhere where I could put my refuse. Sorry, but large crowds makes for lots of trash and ya gotta have someplace to put the stuff.