I saw the video featured by The Atlantic blogger Andrew Sullivan. The video depicts an attack on one of the six ships in the "Freedom Flotilla," a convoy that was attempting to break the seige of Gaza ("The world's largest open-air prison") by bringing in badly-needed supplies. I attended a talk a few months back where it was claimed that, yes indeed, Israel claims that civilian goods are permitted to be imported into Gaza, but the actual goods allowed in are randomly and arbitrarily chosen, so that a particular product being shipped in can wait for literally months before being able to reach its destination.
Update: The Guardian reports on the "total economic blockade" of Gaza.


Israel has imposed a full economic blockade on Gaza, which it calls a "hostile entity", since the Palestinian Islamist movement Hamas seized control in June 2007. Nearly all exports and imports are banned and only a tightly limited supply of food and medical aid is allowed in. 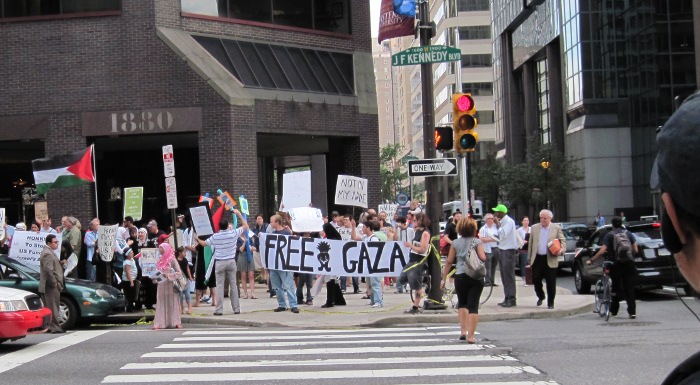 The Israeli Consulate is in the building in back of the protesters, but everyone faced the street. They all cheered whenever a car drove by honking in soldarity. From Sullivan's comments on the video:


A simple point. The violence by the activists is pretty abhorrent. These are not followers of Gandhi or MLK Jr. But the violence is not fatal to anyone and it is in response to a dawn commando raid by armed soldiers. They are engaging in self-defense. More to the point: they are civilians confronting one of the best militaries in the world. They killed no soldiers; their weapons were improvised; the death toll in the fight is now deemed to be up to 19 - all civilians.


My take after viewing the video was that the Israelis appeared to have come in expecting the raid to be just like a police raid. All of the "perps," knowing they were criminals, would simply raise their arms in surrender. The reason why that wasn't a reasonable prediction was that the attack took place in International waters, where members of the Freedom Flotilla simply had no reason to expect an attack and had absolutely every right to defend themselves. 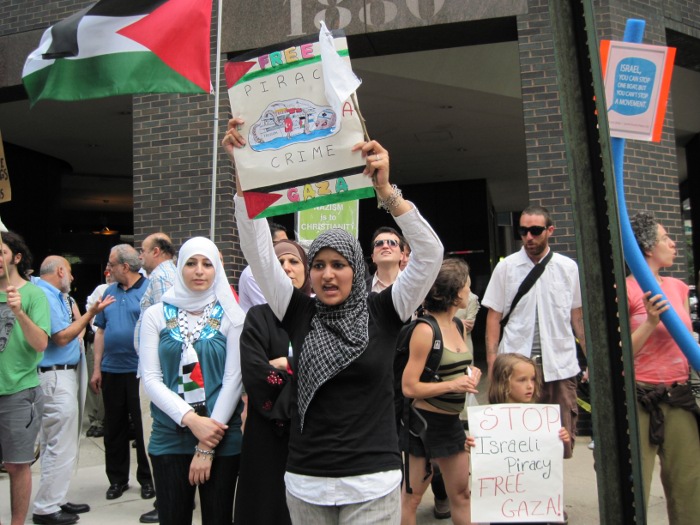 In what's essentially an admission of guilt, Israel is trying very hard to keep the persons and reporters who were on the Flotilla from speaking with any reporters on the outside. Somehow, Al Jazeera was able to obtain some of the video footage from the encounter and the story told in that video makes it clear that Israelis fired the first shots, a white flag was raised after the first casualty, but many civilians were killed after that. Also, "three German citizens, all of whom are either current or former members of the Bundestag, Germany’s Parliament" confirmed that Israel fired first.


Cetin [Marmara] is among a handful of Turkish activists to be released; more than 300 remain in Israeli custody. She said she agreed to extradition from Israel after she was warned that conditions in jail would be too harsh for her child.


And in what's another very clear sign of Israeli guilt, Cetin testifies :


"[The Israelis] asked me only a few questions. But they took everything – cameras, laptops, cellphones, personal belongings including our clothes," she said.


It's clearly a reasonable presumption that recordings would have been made of the boarding. If everything Israel did was proper and correct, why would there have been any harm in allowing the Flotilla's recordings to get out? 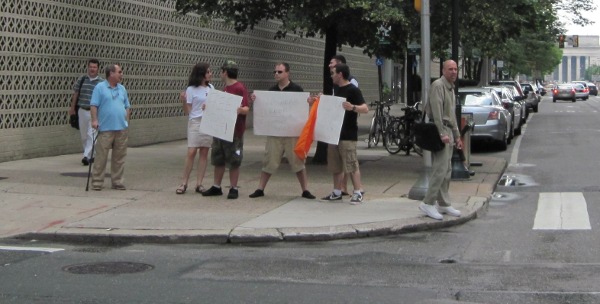 Heh! These were the counter-protesters. What do their signs say? Dunno. They used single lines to write evrything, so the signs were readable from arm's length, but utterly illegible from where we were. 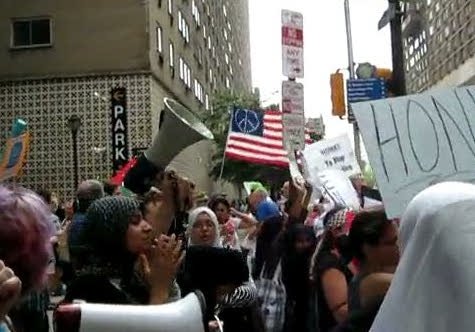 A video still from an MP4 that I shot. Here's a forty-second Flash video taken a few minutes earlier. There will be another protest Saturday. The National Assembly provides three action items:


1. Organize an emergency protest against Israel's attack on the humanitarian flotilla.  Find events near you and post your event details by clicking here.

3. Learn more about the deadly impact of U.S. military aid to Israel and take action to end it by clicking here.